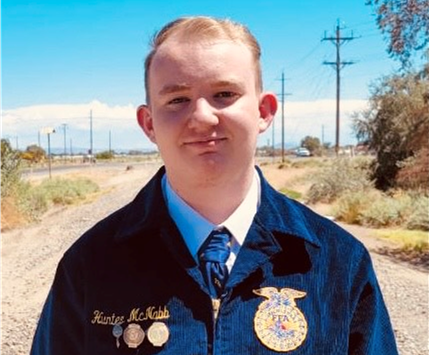 McNabb will travel and compete at the National FFA Convention and Expo in Indianapolis from Oct. 26-29, 2022. His project is titled The Role of Agriculture in Future Occupational Preferences in Students. To gain data, McNabb surveyed fellow Oasis high school students asking about their agricultural interest and backgrounds including familial history in agriculture.

“The results from the survey were very enlightening. They highlighted concerns for both the environment and animal welfare regardless of the student’s previous agricultural experience and exposure,” said McNabb.

McNabb’s project earned a gold ranking at the Nevada State FFA Convention this fall. It was then judged nationally by a committee of high school teachers and college professors.

“I’m excited to have the opportunity to interact with peers with similar interests. I appreciate all the support that I have received from the school. I’m honored to represent Oasis Academy, Fallon, and Nevada at the national level,” continued McNabb.

“We are so proud of Hunter and all his hard work. We are excited for him to go to Nationals and present!  He truly deserves this opportunity!” said Chief Academic Officer and Principal Rochelle Tisdale of McNabb’s accomplishment.

Nationally FFA has more than 735,000 members with local chapters in all fifty states as well as Puerto Rico and The U.S. Virgin Islands.